I first moved to Los Angeles when I was 20 years old. I had no idea what I was doing. Driving in on I-10 West in a rented moving truck, seeing that everblue sky for the first time; those tall, bending palm trees; everything drenched in the relentless sunshine and traffic… I was green and young and entirely awestruck. But I grew to love LA deeply, and over the next decade the cloudless, vivid sky and outrageously tall palms became part of the background for me, hardly noticeable.

Then I spent a few years living in New York City, and missed California every single day. When I finally moved back, driving in on I-10 West again (in a much larger moving truck this time), I was as awestruck by that first glimpse of the city as I was the first time I saw it. But, I noticed, something was a little different this time around.

The palm trees were taller.

On first blush it might seem the most obvious fact on Earth. Of course the Los Angeles palm trees are growing. They’re living organisms, aren’t they? Why wouldn’t they be getting taller? Well, if you haven’t spent time in LA, you might not realize another obvious fact: the palm trees here are impossibly tall.

I don’t mean they’re ten or twenty feet taller than you might expect them to be. In the wild, these Mexican Fan Palms—Washingtonia robusta, taxonomically speaking—rarely exceed 50 feet in height. Many of Los Angeles’ palms, on the other hand, are now exceeding 100 feet tall. This is a full 50 feet taller than they should have ever grown. Seeing these monsters in person is truly absurd.

Why? Why are these transplants growing to such extreme, almost unthinkable heights?

Mexican Fan Palms aren’t indigenous to the Los Angeles area, but the climate here isn’t all that different from their native Baja, Mexico. It’s true that they’re being pruned and watered more often here than in the wild, but does that really account for a height 200% the norm? Researchers and botanists aren’t sure.

All we know is this: They started being imported by Spanish missionaries in the 18th century, possibly in part because the palm tree is so closely associated with Easter celebrations. By the late 1800s, wealthy Europeans were planting them for their exotic look. The oldest palms still standing in LA are thought to be the Longstreet Palms, which have been standing on the same plot of land for almost 140 years. In the 1920s and 30s the city began large-scale palm tree planting, sometimes putting up hundreds a day, at first to boost the city’s “Hollywood” image and later to create jobs during the Depression.

Then, they kept growing.

By the 1950s and 60s the palms had far exceeded their previously-expected height limit. Their perceived exoticness had mostly waned; the meager shade they provided had vanished into the clouds; many were now soaking up water to the tune of hundreds of gallons a week. They were increasingly being called “sky dusters”, due to their tiny, useless fronds appearing to dust the sky.

And still they kept growing.

When I first moved to California they were already egregiously tall. Then they blended into the background for me. When I moved back, and saw them with fresh eyes, they were so shockingly tall I couldn’t help but wonder whether they were air traffic hazards. That’s what led me to read about them, to learn their history and their reason for being here. That’s also what led me to decide I wanted to grow some of my own.

Mickey Hargitay Plants is a hidden Hollywood gem. A plant store that manages to be both sprawling and compact, friendly and aloof, popular and unknown. It’s run by Mickey Hargitay’s son, but they don’t ever really mention that. I went in one weekend to see what their selection of Mexican Fan Palms looked like. I was hoping they’d have one for less than $20; I thought it might be fun to raise a little guy in a pot for a while, then plant him in the ground when I one day have the real estate, then watch it grow and grow.

But I couldn’t seem to find one. Even as I looked up and saw towering robustas on the nearest street corners, there weren’t any on ground level at Mickey Hargitay’s. I asked one of the resident plant specialists about them.

“Oh, those. Those are hard to come by nowadays. I’m not sure any nurseries around here will have them, unless they specialize in palms.”

How strange. These plants are everywhere—you can’t throw a stick without hitting a palm tree in LA—but it’s tough to get young ones? At first I figured the towering sky dusters must be infertile. Perhaps too old to bear seeds.

But no, the LA palms are reproducing machines. Their seedlings are essentially weeds for landscapers. Baby fan palms are growing in every crack, crevice and clot of dirt in Southern California that gets even the smallest amount of water. After seeing a few articles that document the thousands upon thousands of baby palms being choked in urban crevices, I couldn’t help but notice them every time I walked down a street. They are truly everywhere. It’s fascinating and heartbreaking and, in some intangible way, just so perfect for the Los Angeles urban landscape. 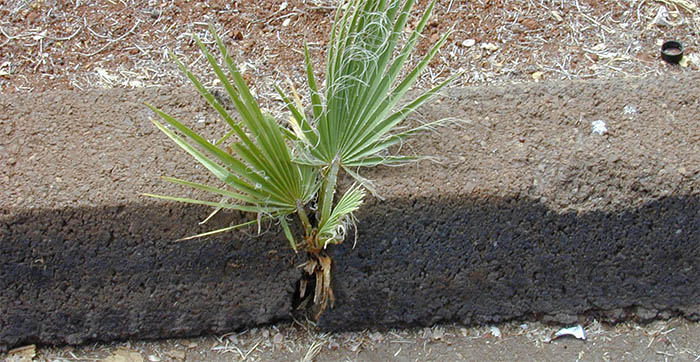 So what gives? Why are there no young Mexican Fan Palms for sale, and, for that matter, seemingly no fan palms under 20 feet tall anywhere in LA?

After researching this, the answer I found was pretty obvious. I’ve actually already referred to it in this article. Palms are no longer a popular item in 2019, for a variety of social and ecological reasons. The city of LA has decided not to plant any new palm trees, as they don’t provide enough shade in an increasingly-hot city. They soak up too much water, and as temperatures rise across the globe, water becomes more precious in Southern California—and no one wants to dump so much of it into the ground to get no shade or fruit in return. And of course, there’s the social aspect. Palm trees simply aren’t so exotic and new anymore. Los Angeles isn’t Hawaii, and is no longer pretending to be. The age of the palm tree has passed.

All this was running through my mind as I wandered down Sunset Boulevard one evening last month. These slender, massive organisms had seen so much of the city’s development, and were now out of place, and above all, out of time. Scientists think they’re reaching the end of their lifespans soon. And they won’t be replaced. I stood at the trunk and looked up at a mind-bendingly tall robusta that was probably my height during World War I, that had seen the invention of Hollywood’s motion picture, stood tall during World War II air raid drills, avoided land-clearing real estate developers and race riots and earthquakes for a hundred years. Is there really no future for these LA icons?

I looked down, on the other side of the sidewalk, and sure enough, I noticed a tiny green fan happily sticking up from underneath a chain link fence. The mighty old palm had a tiny seedling of its own growing a few feet away. But, unlike most seedlings, this one had avoided the landscaper’s mower. With half of its fan on either side of the fence, it was just out of reach of either side for the next few months. Both incredibly lucky, and ultimately doomed, like its parent. 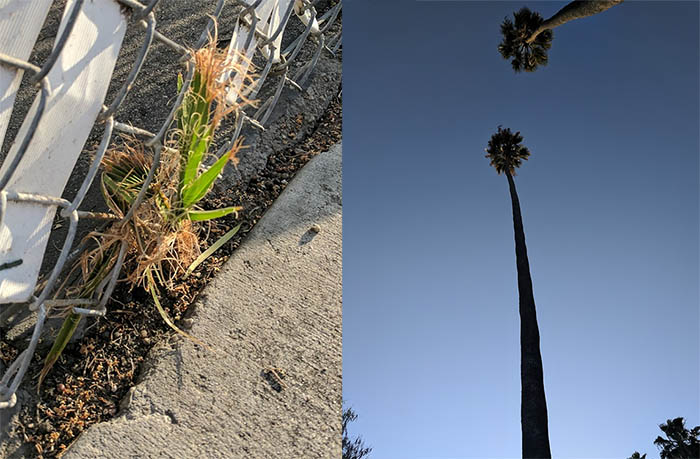 It was at that moment I realized where I could get my Mexican Fan Palms.

I’ve been going out a couple of nights each week, with a gardening spade and a bucket, cutting out these tiny palm trees wherever I find them and repotting them on our balcony. They’ve got a chance to survive now, and might be some of the last gene-carriers from that generation of LA palm trees who saw the city grow from a tiny mission to a mega-metropolis. Through these little guys, those iconic palms might well outlive me, and maybe outlive any children or grandchildren I have. They’re little pieces of LA history, and with luck, they’ll be part of its future again. 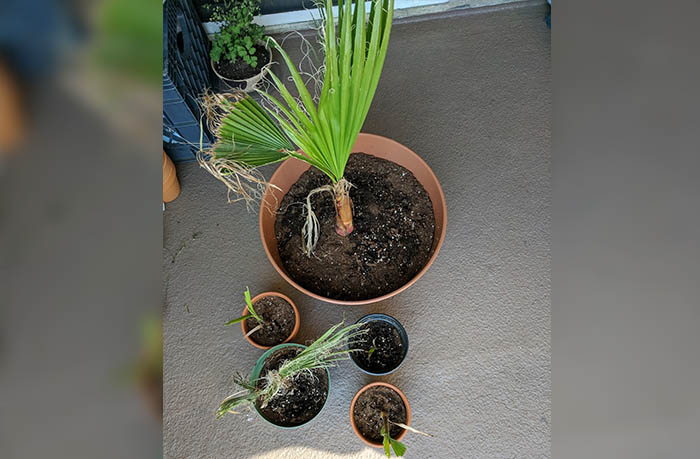