Best I can remember, it was a typically crowded Saturday night in Hollywood when we came up with the idea. My friend Nico and I live a block away from the finest margarita in Los Angeles, served at the El Compadre restaurant on Sunset boulevard, and we were once again getting way too drunk way too early at its hectic, cavernous bar.

“There are three El Compadres, right?” one of us asked. I don’t remember which of us, because I’d nearly finished my second margarita. Their margaritas are unusually strong. “I bet we could hit all three of their restaurants in one night” one or the other of us concluded. Nico is a wild Argentine who has been either falling in love or traveling to exotic locations, or both, every day since the day I met him. He also loves puns. That’s why, if you put me on the spot, I’d guess he was the one who coined the phrase: “The Tres Compadres Challenge.” It just seems like something he’d come up with.

The idea of eating and drinking at all three El Compadre Restaurants in one night stuck with us, and we started drawing up plans. We asked Dave, the bar manager, if anyone’s ever tried to hit all three El Compadres in one night; he said he didn’t know, but if we did it, he’d buy us a round and put us on their Instagram account. That was all the incentive we needed. Although, truthfully, we would’ve done it anyway.

Our plan was this: Take the subway to the first El Compadre in downtown Los Angeles, around 5pm. From there, we’d take an Uber to the second El Compadre, which is next to Dodger Stadium. And from there, since we wanted to end up at the Hollywood location, we would take the #2 Metro bus up Sunset to finish the challenge within stumbling distance of our apartments. In retrospect, taking the bus was an enormous mistake. But I’ll get to that later.

Our plan to hit all three locations in one night

From the beginning, we knew we had to drink at least one margarita at each location. But we threw in something extra: If we ate a full quesadilla at each location, it would also be The Tres-adilla Challenge. I probably don’t need to tell you that this idea was also an enormous mistake.

We marked December 19, 2015 as D-Day. The night before, I ate a small salad, drank a bunch of water, and got plenty of rest. The next morning I stretched, ate a small breakfast, and went to the gym. In contrast, Nico stayed up until 4am the night before and had eaten over a pound of bean burritos at 2am. Nico sometimes acts like a dumb ass. But, pound of burritos or not, it was time to get going. The Tres Compadres Challenge beckoned.

The subway ride from Hollywood to downtown was uneventful. Nico said he preferred the Buenos Aires subway system. I said I preferred New York’s. I find we take these positions about nearly everything we encounter in Los Angeles, except regarding Mexican food. When we emerged at the 7th Street station it was raining, which is rare in Southern California. But the longer you live under the unyielding barometer of perfect weather, the more a drizzle feels like a pressure release. We happily walked the eight blocks south to our first target. 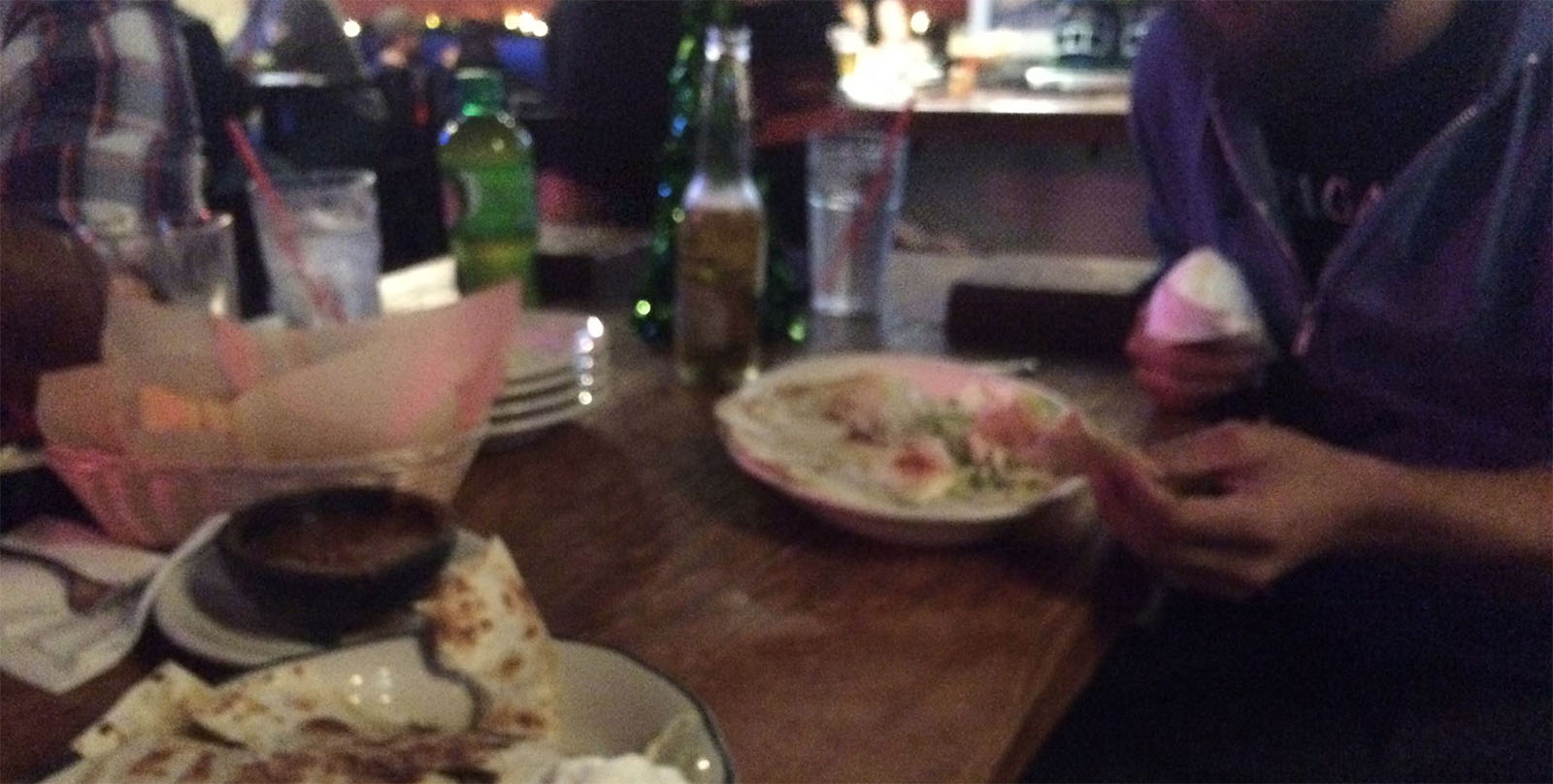 We entered the first Compadre and put our names on the wait list. There was a corporate holiday party happening, so instead of the usual dusky and reticent Mexican atmosphere there were two dozen dorky coworkers dancing to Kanye remixes. Very unfortunate. Muy unfortunado.

When a long table opened up, the staff asked the couple ahead of us on the wait list if they’d mind splitting the table with us. They said okay, then proceeded to side-sit next to each other instead of sitting across from each other, like normal humans beings would. See diagram below.

In any case, we downed our margaritas on the rocks, inhaled our quesadillas, and got the hell out. Two big mistakes I made were ordering a beer, and deciding to eat a bunch of chips. Okay, obviously those are terrible ideas when you have two more restaurants to visit. But in my defense, I was hungry. I can tell you now from experience: If you undertake the Challenge like we did, do not order any additional drinks or eat any chips at all. No matter the temptation. Trust me.

We hopped into an Uber and rode up to the second restaurant, which is next to Dodger Stadium. The driver said he recorded audiobooks for a living. His voice seemed unremarkable. When we told him about our Challenge, he asked whether it’s a regular Saturday night tradition for us. I said no, because we aren’t morbidly obese alcoholics. 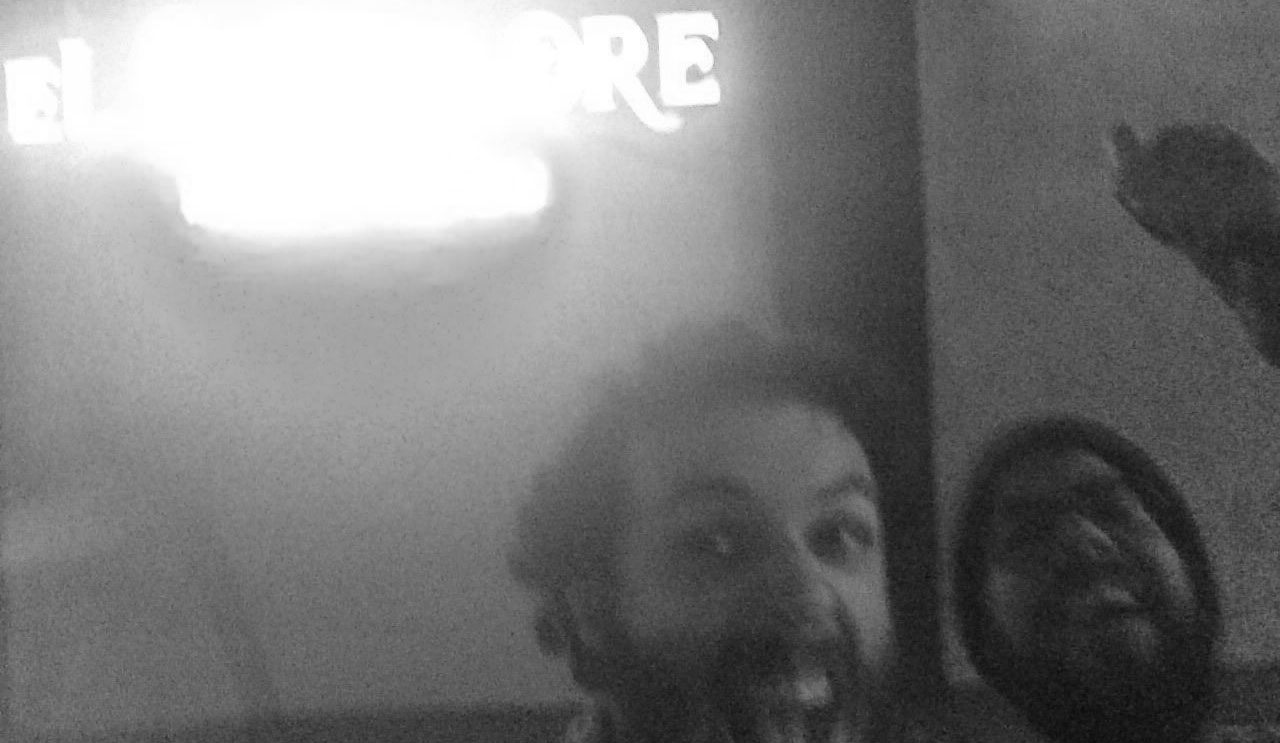 Editor’s note: Sorry for the quality. We were excited. And full of cheese.

We grabbed a booth and ordered our drinks and quesadillas. After half a margarita, things got a bit fuzzy for me. I can remember groaning through the end of my second cheese quesadilla, already feeling slightly ill and more drunk than I should be, considering I was only three drinks in. Nico seemed to be handling it better, wolfing down his enormous cheese entree without a second thought. A mariachi band started playing, their punchy harmonies momentarily parting my drunken fogginess, sobering me up just enough to realize I needed to vomit.

Outside I led Nico to the bus stop and paused, hands on knees, unsure whether I’d throw up. Before I could decide, the bus arrived. All I remember for the next forty five minutes, as the Metro rocked and heaved west down Sunset, was that there was no way on Earth I could eat another quesadilla. Ever, in my life. I was terminally full of cheese. It was a grim scenario.

By the time we finally made it to the last Compadre, the crowds had started dying down. It must’ve been after 10:30pm or so, but truthfully I have no way of knowing. My phone was dead and I wished I was. The bus ride must’ve jostled Nico—he said there was no way he could eat another whole quesadilla, and instead, we should just split one. I happily agreed.

Once inside, we ordered two margaritas “Cadillac style”, which means with Grand Marnier instead of the usual mix. It was around that time we saw Dave, the bar manager. I don’t know how we sounded to him, but my guess is pretty goddamn intoxicated. It took a few sentences for him to figure out what we were saying: “All three, Dave! We went to all three tonight!” made sense to us at the time, but doesn’t actually make much sense to a guy who’s just working his normal Saturday night shift. When Nico showed him all three business cards—he’d grabbed one from each restaurant—Dave finally understood. “Holy shit! The trifecta! Let me get a picture.”

It was a proud moment. Dave covered our drink tab and we, somehow, finished that last quesadilla. We had completed the Tres Compadres Challenge, but fallen one quesadilla short of The Tres-adilla Challenge. Maybe we’d try again one day. Or maybe not.

Once outside we said our goodbyes and stumbled to our respective homes. I leaned against a building and dry-heaved for a few minutes. Even in my state of grog I knew that throwing up now would save me a long and bitter hangover, and wicked stomach ache next morning. But I couldn’t make myself barf, best I can recall, and plodded home instead. And that was that: I had survived.

You know that moment right after you wake up from a night of drinking, and—for a precious, fleeting few seconds—you aren’t sure whether you’re hungover or not? It’s a cracked window to heaven, sent by angels to give you a glimpse of how responsible adults should feel in the morning, before the hangover comes crashing down on your abused liver with the ferocity of a bartender shaking your third margarita. The next morning I had that feeling, except it was with my stomach.

For a brief moment I thought I felt fine. Then, suddenly, I felt like I was about to explode. I was full, and I mean acutely full of food, like I’d just finished a giant meal. I squirmed around in bed for a few minutes while my innards roiled. And to top it off, I was slightly hungover. The Tres Compadres Challenge is not for the faint-of-stomach, my friends.

I don’t know if I’ll ever attempt the Tres Compadres Challenge again. Maybe in a few months, once my insides are ready to patch things up with lactose, I’ll find myself craving a sugary tequila drink and cheesy Mexican tortilla again. And maybe I’ll learn to avoid beer and chips next time. Or maybe I’ll get a text message or a tweet from someone who’s dared to invent their own challenge; how about both Wurstküche restaurants (LA’s German “Zweifecta”?), or maybe all four Guisado’s with four tacos at each stop (“The 4x4”?). The sky’s the limit.

Los Angeles is a city with endless potential for dumb ideas. And we should all be thankful. Because these kinds of dumb ideas leave you with the most brilliant memories.